Sometimes one just gets lucky!  I was invited to go to the 50th Anniversary Sky at Night Party which was held on the 25th April 2007 at Sir Patrick Moore’s house “Farthings” in Selsey.

It was a great day, and at last I finally managed to meet up with Brian May!  I had planned to meet Brian at the Astrofest in London at the beginning of this year, but got clobbered by a migraine which was perhaps the most annoying event of 2007 for me.

Arriving at “Farthings” I immediately met up with Dr. May (as he is now 🙂 ) and Sir Patrick, and presented Sir Patrick with a framed A2-sized image of the Belt Region of Orion region.  Although the Orion’s Belt image is not our best work – it has something awe-inspiring about it – and the main thing was Patrick was very happy with his picture.

Things then turn a bit surreal.  Brian and I found quiet room in Patrick’s house [quite difficult, and quite an achievement with over 200 people there, but Brian knows his way around] and we had a chin-wag for what turned out to be a couple of hours.  If you don’t know him personally, Brian must be the most unassuming celebrity out there, and what’s great is he loves talking astronomy!  Brian brought out the laptop and got me involved with the PhD thesis he was then in the process of writing up.  I was very happy to go through it and hope I was of least some little help with his big day on 23rd August.  I must admit, I was highly impressed with the quality of the work, and I think Brian was also very lucky that nobody else had chosen his subject in the intervening 30 years for their own research – shows he knew how to pick a good topic.

It was a great day for meeting fellow enthusiasts too – I met Pete Lawrence for the first time, and managed to catch my long-term supernova hunting friend Ron Arbour before taking the run back to the New Forest.  Great day, will always remember it! 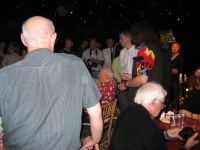 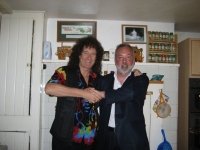 This entry was posted in Writing. Bookmark the permalink.