The Brightest Known Object in Our Universe

According to the Guiness Book of Records this Quasar in the constellation Lynx is the brightest known object in our universe and who are we to argue with them [oops – see the Postscript below]!

Back to the Beginning of Time Itself

This deep-sky colour photograph at first sight shows what appears to be a fairly unimpressive star-field, with an arrow pointing towards a fairly dim, very red, and similarly unimpressive star.  First impressions can however be very misleading, as they are in this case.

Even though this red star’s appearance is pretty uninspiring it comes with a very grandiose label, this star is in fact a quasar designated APM08279+5255, a quasar being the contraction of “quasi-stellar object”.  Nobody really knows what quasars are but one hypothesis is that they are black holes emitting tremendous amounts of energy from beyond the event horizon, as they capture huge quantities of matter from nearby stars.

The quasar in this image is clearly red so lets take a closer look.

A Closer Look and an Explanation 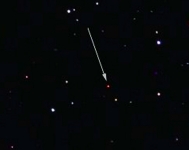 In fact it is a very deep red and was a candidate for a so-called carbon star that was thought to lie within our own galaxy.  The reason this quasar is so red is due to its enormous red shift of 3.87, which means it lies a very long way away.  To be more precise APM08279+5255 lies 12.9 billion light years away from us in the constellation Lynx in the Northern Hemisphere.  Consider that our Universe erupted out of the big bang only something like 13.7 billion years ago and you can start to appreciate what a totally amazing object this quasar is.  It was created near the beginning of time itself.

Although APM08279+5255 only appears to be a magnitude 15.2 star, far too dim to be seen with the naked eye, it was still bright enough for people to think it was in our own galaxy.  The reason it appears “so bright” to us is due to yet another strange coincidence regarding this object.  Between the quasar and Earth lies a large galaxy with the huge gravitational field usually associated with such a collection of stars, and it is the “gravitational lensing” provided by this galaxy that “magnifies” the weak light from the distant quasar making it more easily detected by our Earthbound telescopes.

This quasar no longer holds the record for being the brightest object in the Universe.  Apparently it didn’t actually hold this record at the time of its discovery either.  Recall that the quasar appears to be so bright due to the gravitational lensing effect of a galaxy lying between the quasar and ourselves – well, it seems the existence of this galaxy wasn’t actually known at the time of the discovery and therefore its lensing effect wasn’t taken into account when initially considering the quasar’s brightness.

This unique colour image was taken on a Celestron Nexstar 11 GPS reflecting telescope with a Hyperstar lens attachment.  The image was acquired using a Starlight Xpress SXV-H9C one-shot colour CCD camera.  The image itself is made up from 46 sub-exposures of 50 seconds each, giving a total imaging time of only 38 minutes.  Such short imaging times are made possible using the Hyperstar lens, which turns the normally “slow” f/10, telescope into an extremely “fast” f/1.85 telephoto lens.  Once the raw image data had been acquired it was expertly processed by Noel Carboni, Florida, U.S.A. using his commercially available suite of PhotoShop actions.

Where to Find It

This entry was posted in Deep Space Objects. Bookmark the permalink.