The name says it all!  Noel has just processed this Sky 90/M25C image of the bright red carbon star “La Superba” which can be found in Canes Venatici at a distance of 711 light-years: 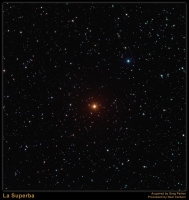 La Superba or gamma Canum Venaticorum appears amazingly red to the observer.  It is a semi-regular variable star with a visual magnitude range of 4.8 to 6.3 and a period of 158 days.  It is amongst the brightest of the giant red carbon stars, this is the phase of a star’s life where energy generation is from helium-to-carbon fusion reactions.  There is an abundance of carbon compounds in the star’s outer atmosphere and these molecules tend to absorb short wavelength radiation leading to the star’s very red appearance.  The temperature of La Superba is very low at only 2200K which makes it one of the coolest true stars.

This entry was posted in Sky 90 and SXVF-M25C and tagged Sky 90, SXVF-M25C. Bookmark the permalink.