Local independent TV broadcaster Meridian TV was filming at the New Forest Observatory on the evening of 2nd December 2008.  Unfortunately they were still filming when that evening’s News was on and I think I missed my image of the Moon/Venus/Jupiter on the weather introductory picture 🙁 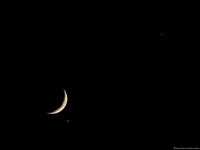 The image was taken on the Monday night [1st December] after a fast (but legal!) dash home to try and photograph the occultation of Venus by the Moon.  I was too late for the occultation itself, but managed to get some nice shots of the Moon, Venus and Jupiter in the same frame.  After half an hour or so it clouded over, just as well as I couldn’t feel my fingers by then – it was unbelievably cold that night.

A short article on the forthcoming large-format coffee-table book Star Vistas will be shown either tonight [3rd December] or tomorrow night [4th December] on Meridian News.

This entry was posted in Television and Radio. Bookmark the permalink.