I have just heard some very sad news – Professor Peter T Landsberg has died over this weekend 🙁  Landsberg is a name you will be familiar with if you have studied Thermodynamics (Entropy), Quantum Mechanics, or Time to any extent.  I can vividly recall picking up a book in the Sussex University Bookshop called “The Enigma of Time” by P T Landsberg and buying it on the spot.  Two strange things as I write this, one I also recall being very surprised to read on the back cover that Peter was at the University of Southampton.  I had taken a first degree in Physics, Maths and Astronomy between 1975 and 1978 at the University of Sussex and I was familiar with the name Landsberg in the field of Quantum Mechanics and for some reason I expected him to be somewhere like Caltech where you would find the likes of Feynman – strange!  What’s even more strange is that I see the publication date for the paperback edition of “The Enigma of Time” is 1984 – yet I had left Sussex some 6 years earlier.  I would have sworn that I bought the book during my Undergraduate studies – clearly I didn’t – and I have no recollection of going back to the bookshop in 1984, and have no idea why I would have done so.  Already the memories are muddled!!

Fast forward 20-odd years and I find myself at the University of Southampton starting as a junior lecturer in Electronics – I am in the land of Peter Landsberg!  I didn’t think this at the time, I had forgotten all about the above, and it was several years before I realised Peter was at Southampton and it was probably seeing him in the Staff Club that triggered all the long-lost memories.  I got to know Peter a little, and we even had a few meetings with another Prof. from Physics about the Fundamentals of Quantum Mechanics – great times!!  However, around this time I also got involved with a spin-out company and I lost contact with Peter, and much else that was pleasant in life to be honest for 3 long years.

Peter was a most unassuming character – unbelievably sharp in mind (and body) well into his 70s.  Peter used to keep very quiet about his age, all he would say was that he was “very old” 🙂  However, I have a paper from Mathematics TODAY entitled “An Interview with Peter T. Landsberg C. Math FIMA on the Occasion of his 80th Birthday” and the paper is dated October 2002, so Peter was born some time during 1922.  Peter met Einstein and David Bohm and had a great many adventures in his life including being robbed on a Cuban beach (he was attending a Conference in Cuba) and being left with only his swimming trunks to get back to the hotel some distance away.  I was invited to his house for a party and met his wife Sylvia and my wife and I signed the Guest Book as we left and noted the many very prominent people who had crossed the Landsberg threshold.  Peter was a Genius – a title he would not have liked at all – but tough, he was one.  He was also a great humanist having left Germany in rather difficult times (especially for a Landsberg!) much to our benefit.

I see that I had sufficient presence of mind to get Peter to sign my copy of “The Enigma of Time” in 1992, I also have a signed copy of his book “Seeking Ultimates” dated 10th December 1999 – so there are a couple of things I have in addition to my memories to remember this great man by.  Finally, during my period in exile when I was at the spin out company I must have returned to the University Staff Club for lunch, and fortunately I had my camera with me as Peter was in as well.  So my most treasured Peter T Landsberg possession is reproduced below –  I will sorely miss the chance to sit down and discuss Physics with such a pleasant and learned man ever again.  So long Peter – it was an honour and a pleasure to have met you. 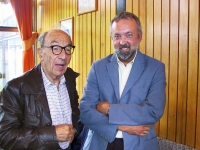 Postscript: I just recalled as I was finishing writing this entry that I had offered to write Peter’s Biography.  Peter was in agreement with the project but suggested, in his usual way, that perhaps the Publishers would not actually be at all interested in his Biography.  I wrote to a number of Publishers discussing the project – and Peter was unfortunately correct – there was no interest.  And so the World has lost a remarkable piece of history as well as a great human being.