The third NFO “Deep-Sky Image of the Week” 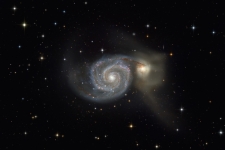 This week’s spectacular image of M51 (the Whirlpool Galaxy) comes from Bud Guinn who hails from the U.S.A. and frequents the American astronomy forum “Our Dark Skies”.  Unbelievably this is the “first light image” taken using Bud’s new remote facility he recently commissioned with a couple of friends.  Details are as follows:

The remote facility is now in “monsoon season” so this first spectacular image is the only one produced so far.  We eagerly await the follow-up images Bud 🙂

M51 (the Whirlpool galaxy, NGC5194) lies only 15 million light years away (in galactic terms that’s close) in the constellation Canes Venatici (that’s the same constellation that contains La Superba).  It is clear that there is a gravitational interaction with the galaxy NGC5195 and a thin bridge of gas can be seen connecting M51 to neighbouring NGC5195.  M51 as you can see is one of the most impressive examples of a face-on spiral galaxy.  Thank you for sending in this truly superb image Bud 🙂