Deep-Sky Image of the Week by astrophotographer Alan Chen 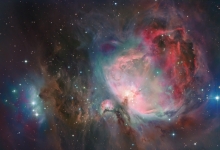 This jaw-droppingly beautiful image of the M42 and “Running Man” region in Orion has been sent in from sunny Florida U.S.A. courtesy of Alan Chen.  I have known Alan for many years and have always admired his work, much of which has been acquired at the well-known “Chieflands” site in Florida.  The specs for this fantastic image are as follows:

A high resolution version of this image can be seen here.

M42, M43 and the Running Man all lie just below the Belt of Orion at a distance of 1,500 light-years.  M42 can be seen as a glowing patch of light with the naked eye and it blazes away at a massive magnitude 3.7 (which is pretty enormous for a nebula!).  This is an annual imaging target for most imagers each winter simply because it is so bright.  However rather than get a monotonous string of M42 images all looking alike, this object is pretty much unique in that I don’t think I’ve seen two images (taken by different people at different times) that look indistinguishable.  It is in the processing that the real beauty of M42 is revealed and as you can see Alan has done a remarkable job on his data, and it is in the processing that the uniqueness of each and every M42 image is created.  So, don’t worry about not getting your M42 published because “we’ve already had that one shown before” – so long as it is a breathtaking image – like this one – you stand a very good chance of it appearing on the “Deep-Sky Image of the Week”.

And – PLEASE – don’t think if it’s not colour I’m not interested.  I actually prefer negative black and white images with that beautiful “battleship grey” background for many faint objects that simply don’t do well in colour.  Not only do they look more “scientific” I think they simpler look better to the eye.