Deep-Sky Image of the Week – Astrophotographer Yours Truly 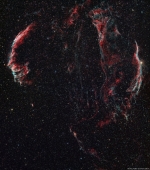 The deep-sky image for this week is one of mine 🙂  It is perhaps not one of the best-looking images that I have taken, but it is one of my favourites due to the amount of time I spent in getting the data.  This is still the most time (and data) intensive image I have produced to date (but it will be surpassed once the mini-WASP is let loose to do its thing in earnest).  This image of course shows the famous Veil Nebula in Cygnus, a supernova remnant, and a most beautiful object.  All imaging was undertaken using the Sky 90/M26C one-shot colour CCD combination.  I started on this marathon imaging run by just taking the Northern section of the Veil in RGB.  I spent a LONG time in getting this data (around 8 hours or so) and to be frank, when I saw the results I was less than impressed.  The filaments were a bit fuzzy and not very well defined at all, and the image just “looked wrong” with the bottom half missing.  As I didn’t have an OIII filter at the time I ordered one up and in the meantime I imaged the lower half of the Veil nebula in RGB, around another 6 hours or so.  The OIII filter arrived and I imaged both halves of the veil in OIII and then I did the same again thing for H-alpha.  We’re now talking about 30-40 hours of data on this one object alone.  After Noel Carboni put in around the same amount of image processing time – we arrived at this result.  As I said – not one of the best – but certainly the hardest earned 🙂

I have a couple of large deep-sky objects planned for the mini-WASP array that will make the Veil imaging marathon pale into insignificance by comparison, keep visiting the New Forest Observatory to see developments.  And to remind yourself of the power of the mini-WASP array, it would have imaged the whole of the Veil nebula in one go with its two Sky 90s and two M26C one-shot colour cameras.  And as the mini-WASP array also has filter wheels for each camera with H-alpha, H-beta, OIII and SII filters loaded – you can imagine what “the beast” will be turning out in the coming years.