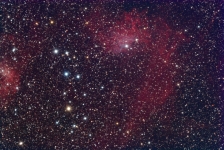 I managed to get 2-hours on the Flaming Star nebula in Auriga with the Sky-Watcher Esprit ED-100 quintuplet refractor last night.  Once again, not long enough for a pretty picture, but long enough to check out its performance.  This image comprises 6 x 20-minute subs, I was on sub 8 when the “lost guide star” alarm bells went off as the fog had come down in a big way.  On checking through the subs, sub 7 was already in the fog 🙁  Still – 2-hours of data on a new system is very useful.  Good star colour in the coloured stars, and more to the point – the correct colour.  Good star shapes across the chip, possibly a touch “eggy” in the corners and I expect that is due to poorish Polar Alignment which I am sure is now off quite a bit with all the mucking around with the mount.  The image was taken with the IDAS filter in-line which meant retraining the Robofocus before imaging using Capella as the focus star.  When I had achieved focus I ran CCDInspector and got +0.1″ +0.1″ for the chip flatness in X and Y (which is pretty excellent so I didn’t adjust the camera at all) and when I looked at the collimation it was the magic 0.0″ – perfect collimation – something I had never achieved using the Sky 90s!  The Flaming Star nebula came out well and the reflection region in the centre of the head is pretty clear too.  Not as good an image as in “Star Vistas” taken with the Sky 90 – but then again – the book image was 5 hours and 37 minutes of RGB together with 6-hours of H-alpha so that’s not too surprising.  If I had managed to get 11 and a half hours of good quality data on the Flaming Star nebula with the ED-100 quintuplet I would have ended up with a pretty spectacular image that’s for sure.

This entry was posted in mini-WASP Array, News. Bookmark the permalink.