The NFO control room during the 2012 Transit of Venus 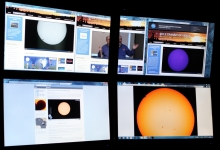 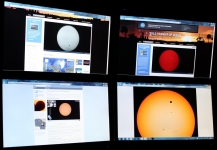 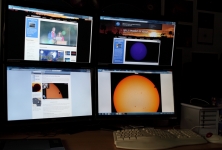 This was the view of the 4-monitors in the New Forest Observatory Control Centre last night/this morning during the Transit of Venus.  Screen top left was Norway – this was the first to show ingress, a good few minutes ahead of Mauna Kea.  Top right screen was the NASA link from Mauna Kea.  Bottom left screen was the best link of the evening, some guys that work on the Kecks as technicians had taken the day off work to set up a link with a small (completely home built) purple refractor imaging the Transit and they hooked up to the Internet with not only real time live images, but also with a really great question and answer session.  Well done guys – you put on a great show AND you managed to keep me entertained (i.e. awake) for the whole event – brilliant stuff!!!  Bottom right screen is the image download from the Solar Dynamic Observatory (satellite) that I used to create the animation.  The first image was taken at ingress – the second image was taken around mid-transit – and the third image was taken as the 2012 Transit of Venus was coming to an end – an unforgetable evening (and early morning).

This entry was posted in News, Projects. Bookmark the permalink.