With the recent passing of Sir Patrick Moore I thought it would be worth revisiting this post from July 2007 where Sir Arthur C Clarke pays tribute to Sir Patrick.  Sir Arthur sent me the article asking me to put it where the U.K. astronomical community would see it.  I had actually arranged for it to appear in most of the daily newspapers but in the end it only appeared in Astronomy Now magazine.  Why was that?  Well the day before the article was to appear in the newspapers Patrick made a politically incorrect comment about too many women appearing on the BBC – and the newspapers promptly dropped the article 🙂  Good old Patrick – bit of a master when it came to hitting his own wicket at times.  Never mind – for those of you that missed the original article, here it is again.  Sir Patrick and Sir Arthur were old friends and they used to Skype regularly – it is amazing how closely key events coincided in both their lives.  In 2005 Sir Patrick and Sir Arthur published “Asteroid” in aid of the tsunami disaster that hit Sri Lanka – published by Canopus Publishing Ltd. ISBN 0 9549846 0 9 – I wish they had done more work together, it would have been a great collaboration!

From Telescopes to Television: Fifty Years of The Sky at Night 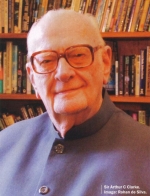 My old friend Patrick Moore has just completed hosting The Sky at Night programme on BBC TV for 50 years without a break.

And what a half century it has been!  The Space Age had not even begun when Patrick presented the first Sky at Night in April 1957 — but as if on cue, Russians launched Sputnik One just six months later, triggering off the Space Race. Thus Patrick has been our able, dependable and colourful guide to the most fascinating journey in the history of humankind – our species finally venturing beyond its ‘cradle’, the Earth.

But Sky at Night has not been just a gee-whiz show of rockets, satellites and other expensive toys deployed by rich nations trying to outsmart each other. At its most basic, it’s a show about exploring that great laboratory within easy access to anyone, anywhere on the planet: the night sky.

We have to admit, though, that the timing of The Sky at Night’s birth couldn’t have been better. Until the advent of the Space Age, astronomy was regarded as an esoteric pursuit of lonely old men – yes, it was mostly men at that time! – peering through telescopes in search of far away celestial objects. (Edward Young summed it up when he wrote: ‘An undevout astronomer is mad’.)  Sputnik propelled the study of planets and stars into headline news, and traveling to space was no longer ‘utter bilge’ (as one Astronomer Royal famously dismissed it, only a few months before the Space Age started).

The BBC recently asked me for my recollections of working with Patrick, and I realised that I’ve known him for much of my career.  Somebody once used the phrase ‘celestial knights’ to describe Patrick and myself, and there’s some truth in that.  We were both knighted by the Queen around the turn of the millennium.  We both have asteroids named in our honour (2602 Moore; 4923 Clarke).  And the first and only book that we co-authored was on these interesting pieces of cosmic debris (Asteroid, Canopus Books, UK, 2004).

Back in the 1930s, when we started talking about astronomy and space, the subject was looked upon with ridicule, if not outright derision. We were both ‘space cadets’ during the early days of the British Interplanetary Society (BIS), which was promoting space travel long before it became respectable. Some must have considered us to be part of the lunatic fringe – and in a very literal sense, they were right.

Both Patrick and I were fascinated by the Moon – not just observing it through our home-built telescopes, which we had great fun doing, but also discussing practical ways of reaching the Moon. By this time, rocket experiments were being carried out on both sides of the Atlantic. The Second World War settled any doubts about what rockets were capable of, when Wernher von Braun and team unleashed their V2s on London.

As the War was ending, we started looking for peaceful uses for rockets so they could earn an honest living. That’s what inspired my paper in Wireless World of October 1945, where I invented the geosynchronous communications satellite.

The same year, we revived the BIS – and found that our esoteric and fantastic discussions were suddenly being taken more seriously. On one occasion, we invited Patrick to give us a talk about his (and my) favourite celestial object: the Moon.

By some odd chance, a report of that meeting found its way to the New York press and was read by Eric Swenson, head of the publishing firm W W Norton. Eric had been looking for an author to write a book about the Moon, and upon checking, found that Patrick was also secretary of the British Astronomical Association’s Lunar Section. Shortly afterwards, Patrick was commissioned to write the first full-scale book in his career.

I don’t claim any credit for this. Left to himself, Patrick would have done very well!

By the time the Space Age dawned, Patrick was well on his way to becoming the best known public astronomer in the world. The Sky at Night only consolidated a reputation that was well earned through endless nights of star-gazing, and many hours of relentlessly typing an astonishing volume of books, papers and popular science articles. (Another trait we share: we answer all sensible letters we receive, and occasionally even crazy ones.)

Patrick not only talked and wrote about the Moon, but also mapped it.  A tribute to his lunar observations came in 1959, when the Russian Lunik 3 probe obtained the first pictures of the far side of the Moon which is always turned away from the Earth. The extreme edge of the Earth-turned hemisphere is always very foreshortened, and Patrick had painstakingly mapped those difficult regions.  When the Lunik3 images came in, the Russians used his charts to link their pictures to the familiar face.

And when Patrick first invited me to The Sky at Night in late 1963, it was once again on our favourite subject. By then, the Apollo programme was in full swing, so we set our sights high and talked about ‘Bases on the Moon’. On that programme, first broadcast on 6 January 1964, I bravely made some predictions on our exploration of the Moon. Looking back, it’s amusing to see how I was right about the near term goals, but way off the mark on the longer term ones:

In those heady days of Apollo, none of us could have foreseen the distractions and setbacks the space-faring nations were to suffer in the 1970s and 1980s. But there’s no doubt in my mind that we’ll eventually return to the Moon and reach Mars, after taking care of various ‘road bumps’ on our way.

That’s one more thing Patrick and I share – an abundant optimism about humanity’s future in space. I have great faith in optimism as a philosophy, if only because it offers us the opportunity of self-fulfilling prophecy.