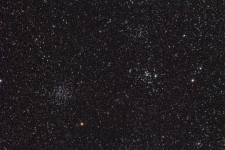 Two very nice open clusters, quite low down in the sky for me, in the constellation Puppis.  These are M46 (on the left) and M47 (on the right).  There are also two other open clusters as well as two planetary nebulae in this image.  Between M46 & M47 towards the lower part of the frame is NGC 2425, and above M47 is NGC 2423.  A planetary nebula can be seen in M46, and there is a second planetary to be seen as well.  Move upwards from the planetary in M46 to the first brightish white star you can find.  Then move away from this star in the 11 O’clock direction – the fuzzy round red blob is not a Carbon star, it is another planetary nebula.  Plenty going on in this single frame image from the mini-WASP array, expertly processed by Noel Carboni.