Lovely clear evening last night, but there was an annoying Moon hanging around for most of the imaging session.  Never mind, the Moon isn’t too much of a problem when you’re taking star shots.

The one frame has caught two Carbon stars in the constellation Sagitta.  The central star is X Sagittae HD190606 and towards top right is BF Sagittae (looking a lot less red) GSC 1629:945.  Carbon stars are invariably (no pun intended) variable stars and typically the brighter they are (during the variable period) the less red they appear.  Maybe BF Sagittae was near peak brightness??

Image captured using all 3 cameras on the mini-WASP array, 255-second subs and around 20 subs per camera.

Slowly working my way through the Carbon Star Observer’s Checklist 🙂 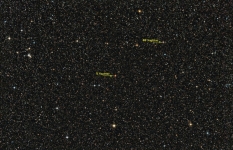 This entry was posted in mini-WASP Array. Bookmark the permalink.