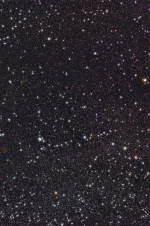 A beautiful clear Moonless night last night meant I was up imaging until 2:00 a.m. – ah the joys of deep-sky astrophotography.

I put the M25C OSC on the back of the Canon 200mm prime lens set at f#4 and took 20 subs at 5-minutes per sub in the Kemble’s Cascade region.

Kemble’s Cascade is at a funny angle as I just started imaging where I dropped the lens into the holder, no alignment done.  The light patch centre-left might be some light leakage – I have now covered all joint regions with Aluminium foil.  The M25C is of course great at picking up the red stuff (unlike the Canon 5D MkII) and I took some out of focus images of NGC7000 which looked promising for future work.

This entry was posted in Canon 200mm prime lens. Bookmark the permalink.