Still last night was a clear night – even if there was a blazing Moon up – and as beggars’ can’t be choosers I grabbed the chance to image C/2014 Q2 Lovejoy.

Only 4-minute subs and only 13 of them as well, but this was a good dry run IF we get a clear Moonless night when I can do the thing properly.

Next – I used 4-minute subs in order to try and get the faint tail – trouble is the comet moves a fair bit in 4-minutes leading to a non-sharp looking image.  Next outing I need to drop to 2-minute subs.  Clearly I don’t want any Moon about if I want to get that faint tail. 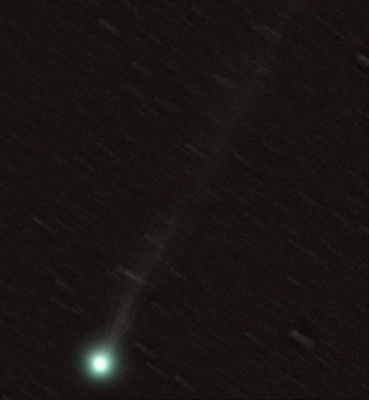 This entry was posted in Canon 200mm prime lens. Bookmark the permalink.