Well I wasn’t expecting to get out imaging last night, but it was clear and the Moon was not directly intrusive so I fired up the Hyperstar III on the C11 with the Starlight Xpress 814C OSC CCS and Lodestar guider and set to work. Almost. It took an hour to sort out gremlins which had come in from God knows where. For some reason Maxim had lost both the camera and guider settings since it was last used a few months ago and it took me an hour of various permutations and combinations to get things back to how they were.

O.K. so the system is tracking and imaging fine so what am I going to go for? I have always fancied trying to get the relativistic jet emanating from M87, and as I have about an hour before it crashes into next door’s stupid great Blue Cedar which belongs more in Exbury gardens rather than a Brockenhurst back garden, M87 it will be.

I randomly chose 4-minute long subs so with the 1-minute dither time I will be taking 5-minutes per sub so 12 subs per hour.

M87 roughly centred and off I went. Good news right from the off – I could actually see a little blip (the jet) on subs as they were downloaded to the computer, so there shouldn’t be any problem with the processed image. Except there was. If I did my normal process using Curves to drag the data out, the jet got lost in the glare from M87. However, if I used the Maxim Digital Development Filter (I usually reserve that one for globular clusters) then the jet magically appeared.

Below is a magnified image of just M87 and the jet, and the second image is the whole field of view of the 814C OSC CCD with the magnified view dropped in as an insert. 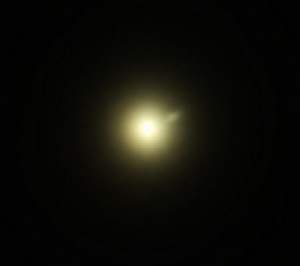 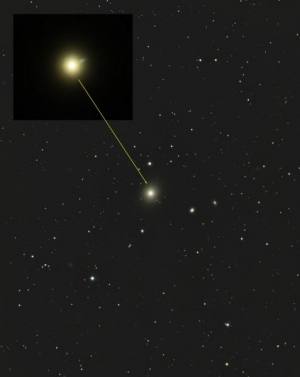 This entry was posted in Hyperstar III and Trius SX-814C, Projects. Bookmark the permalink.