Canon 200mm prime lenses and ASI 2600MC-Pro cameras all up and running. 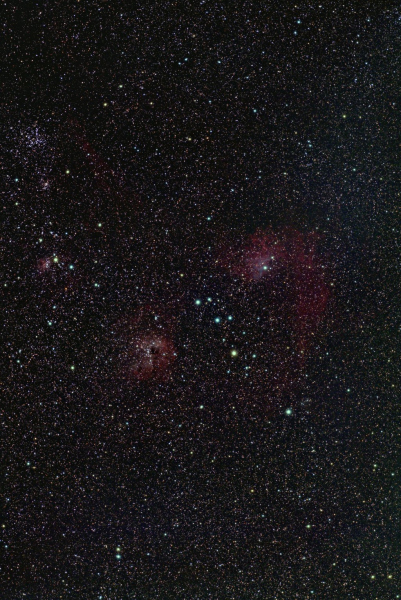 Well it has been months of pain, but finally I have the 2 x Canon 200mm prime lenses, the 2 x ASI 2600MC-Pro cameras, and the 2 x Astromechanics focusers all up and running and talking to each other. Last night I also got down a bunch of flat frames and bias frames for both cameras, so the terrible vignetting is at least now controllable.

The above image of the IC410/IC405 region may look pretty unremarkable, but, it is only 18 x 5-minute subs when the sub-exposure time should have been at least 15-minutes with this kit. Also, this image was taken under a FULL MOON with a one shot colour camera, so the best of both Worlds.

There is one last thing to check on one of the cameras and then it should be all systems go for the next clear Moonless night.

Next job is to get all 3 Sky90s up and running and focused, and then a bunch of flats and bias frames for them as well. Once that has been completed it is again awaiting clear, Moonless nights to get on with some work.