The beginning of September might be considered a touch early [Walter Scott Houston in his “Deep-Sky Wonders considers it a November object] for M31, but the nights’ are now drawing in quickly, and you will be able to get a good long time on this object if you start now.

There are a couple of problems associated with imaging M31 – it is big, and the core is very bright.  The galaxy is around 3 degrees across and I need to rotate the SXVF-M25C camera so that the galaxy lies along the diagonal.  Since the Sky 90/M25C gives me a field of view (FOV) of 2.22 x 3.33 degrees, I have around 4 degrees to play with along the diagonal, plenty enough to accommodate the whole of M31.

The second problem is the bright core, together with the faint arm structure.  There is no doubt that M31 images benefit greatly from a large number of fairly short sub-exposures.  So for my imaging set, sub-exposures between 4 and 8 minutes seem to be optimum, and as for the total exposure time, well as per usual, the more the better.  Anything beyond 10 hours is going to give you a great looking M31.

Anything else?  Deep exposures of M31 will show up lots of very nice little HII regions in the arms.  You can “boost” the appearance of these regions by adding some H-alpha data to your RGB data.  Take around 4 hours or so of deep [20 minute sub-exposures] H-alpha and incorporate into your RGB data using the techniques discussed by either Steve Cannistra or Rob Gendler [see the blogroll links].

Happy imaging M31 – I look forward to seeing your masterpieces! 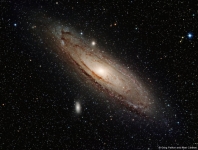 This entry was posted in IOM, Sky 90 and SXVF-M25C and tagged Sky 90, SXVF-M25C. Bookmark the permalink.