How does a mirror really work?

I now realise that the initial case I considered – a page of text facing a mirror with the page parallel to the mirror – was a very special, and very restrictive case – so it wasn’t really the best way to discuss “how a mirror works”.

By having the page of text parallel to the mirror we have restricted the possible planes of symmetry, we also cannot appreciate “depth” as the text all lies on the page a fixed distance from the mirror.  However, this simplified case is still a good way to see how lateral inversion originates.

Let’s go up one level in complexity and simply rotate the mirror by 90 degrees in front of the page of text, as in this photo. 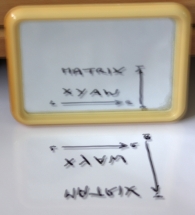 I once again have some text, but have also added a couple of arrows (left-right, and up-down) for added oriention.  We have lateral inversion as before, but by rotating the mirror by 90 degrees we have also now added a new plane of symmetry.  We form an image in the mirror (as discussed in any elementary textbook on optics) which appears to lie as far behind the mirror as the object is in front.  In exactly the same way that we had to think in a different frame of reference when rotating the page of text in front of a mirror parallel to the text, notice that in the case where we have rotated the mirror by 90 degrees, the text (as I have photographed it) is upside down to the observer, but has the correct orientation in the mirror.  So in this more general case where the mirror is at 90 degrees to the object, we do get both lateral (left-right) inversion and up-down inversion as well.

I do recall seeing articles which stated “If a mirror inverts left-right, then why doesn’t it invert up-down as well”.  Well, here we have seen, it does just that, for the more general case where the mirror is not parallel to the object plane.

Tricky things these mirrors!  No wonder that together with smoke, mirrors are often associated with magic 🙂

This entry was posted in Articles. Bookmark the permalink.