I don’t do planets, or the Moon, as my deep-sky setup is not geared up for these.  However, last night’s Moon prompted me into action. 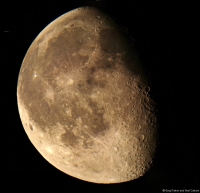 This Moon mosaic was taken with the Canon 40D fitted to a 5x Barlow which in turn went into the Sky 90.  The whole lot sat on an unguided, non-tracking, camera tripod.  I let the Moon drift past the frame and took images every few seconds.  The movement of the Moon, plus the slow shutter speed of around 1/8 second means that none of the frames were particularly sharp – but it was an interesting exercise to see what is involved in getting a good image of the Moon.

Contrary to what common sense suggests – getting a good image of the Moon is not at all easy.  For something that is so bright this is a bit of a mystery to me.  It is suggested that the surface contrast is not too good either – but it’s plenty better than some of the nebulae I have photographed in my time.  However there are a few simple rules, which if followed, should give you a nice image of the Moon – certainly better than the one I show here.

1)  Use a long focal length so that will mean forming a mosaic.  You have plenty of light don’t forget, so your exposure times won’t be prohibitive even if you’re working at f#30!!

2)  Track your imaging setup to follow the Moon so that you won’t get motion blur during the exposure.

3)  Focus is critical (when ever isn’t it?) so make sure that each frame you take is spot on in focus.  If you have the equivalent of the “Live View” mode that the Canon 40D has, use it.

4)  Keep noise to a minimum by using a low ISO number (I used ISO 100 for the accompanying image).  Remember once again, you’ve got tons of light to play with – so make it work for you.

5)  Take your mosaic allowing a good 30% overlap between adjacent frames.

6)  Assemble the mosaic using Photoshop’s “Photomerge” function in CS3.  Why make life difficult?  Just open the files, press the button and let CS3 do all the work.

7)  Apply some digital processing (maybe some sharpening and contrast enhancement) to boost the image.

By the way – the Moon last night was even more of a golden brown than I show in the above image.

This entry was posted in Creating mosaics. Bookmark the permalink.