In the Sky 90 at f#4.5 I prefer to use pretty long subs for faint fuzzies, often around 10-minutes per sub.  With the usual rule of at least 50-subs for a smooth image, this means investing around 8-9 hours total imaging time on this one – but it’s got to be worth it!  Where else are you going to get an image with so many galaxies in a single frame?  Clearly this will be more than one night’s work, and I would suggest that it is probably worth coming back to this one year after year to keep adding more data and detail to this amazing region of space.

Until May – clear skies to you all! 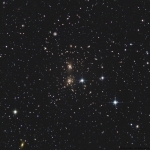