All four screens used for real for the first time today :) 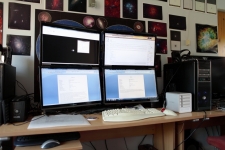 I have started the long and arduous process of putting together another astronomy book today.  For the first time since setting the system up I actually needed to use all four screens to get this particular job done.  Up until this moment I thought the only time all four screens would be used in anger was when I was running the mini-WASP array from indoors, but I actually needed to fire all four up to make my life easier in putting a new data entry into the book.  One screen had the page I was working on, another screen had a previously completed page for use as a template, on screen 3 I had “The Sky 6” open for object data and on screen 4 I had the Internet open on a Wikipedia page for data on the same object.  I don’t think I really need 6 screens to do my book-writing work unlike Terry Pratchett whose famous reply to the question “Why do you have 6 screens on your desk?” was the unforgettable “Because 8 screens won’t fit” 🙂 🙂