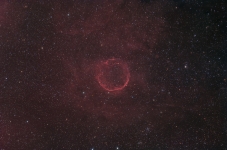 Steve Cannistra needs no introduction as one of the very best amateur deep-sky imagers on the planet – and he holds down a responsible day job too 🙂  When I first started imaging it was Steve’s name and web site that I first chanced upon, I discovered Rob Gendler quite a while later.  Steve’s work has always highly impressed me (especially as he did a lot of great stuff with the little Sky 90 refractor) – but this fantastic image of the supernova remnant CTB1 in Cassiopeia really does it for me – especially as this is my Nemesis object.  My light pollution makes this faint one right at the limits of what I can capture with the IDAS filter and RGB one-shot colour camera, and I have a bunch of very unimpressive faint red smoke rings to prove it.  However – I have far from given up on this object and I will return to it with the mini-WASP array and some narrowband H-alpha filtering – that’ll get the little blighter!

However, as you can see, Steve managed to get a great image of the little blighter quite a while back, and it is one of the best images of this object that I have seen.  It’s an interesting story how I came across CTB1 in the first place.  There was an article in the “Practical Astronomer” magazine called “Six little clusters all in a row” which described a bunch of open clusters in Cassiopeia lying close together that could be seen in the field of view of a low-powered scope.  But what was much more interesting than the clusters that were being discussed was the “half a smoke ring” right at the top of the black and white image that was CTB1.  It just struck a chord – I thought this was one of the best deep-space objects I’d ever seen – and I wanted to get a great image of it.  That’s probably why it has fought back at me so long and hard 🙂

You can see a higher resolution image on Steve’s site here.

Thank you for sharing a great deep-sky image with us Steve!