It’s the power of f-number 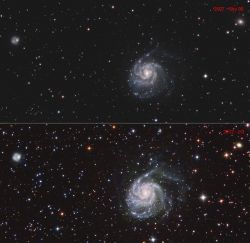 The top image shows in excess of 5-hours (total) data, probably nearer 8-hours, taken using the Sky 90 and M26C 6-Megapixel one-shot colour CCD in 2007.  The lower image shows the recent 2012 data taken using the Hyperstar III with the same imaging camera with exactly 5-hours of total exposure time but this system is at f#2.  Now, theoretically (and practically it seems) an f#2 system is 5 times faster than an f#4.5 system, so 5-hours worth of Hyperstar III data should translate to 25-hours worth of Sky 90 data, which seems about right.  Note the faint outer arms visible in the Hyperstar data that are totally missing from the Sky 90 data.  Also note the far greater number of stars apparent in the Hyperstar data compared to the Sky 90 data.

What does all this have to say about the mini-WASP concept?  Well the Sky 90/M25C (or M26C) combination gives twice the field of view of the HSIII/M25C combo.  As the HSIII is 5x faster than the Sky 90 then I would need to take the equivalent of 5 frames of HSIII data using the Sky 90 in the same time which is 2 and a half Sky 90s, when I have two currently configured.  So 2 Sky 90s doesn’t quite break-even compared to one Hyperstar III, if I get 3 Sky 90s imaging at the same time on the mini-WASP array then I am slightly winning over one Hyperstar III.  The only other thing in favour of the mini-WASP array is that I can fit a filter-wheel to the Sky 90s (not possible with the Hyperstar) so I can grab narrowband data easily with the mini-WASP array as well.  Lastly, the Sky 90s do seem to offer slightly better contrast than the C11/Hyperstar, it’s only a small improvement – but it is there.  The Hyperstar III has higher sampling (better resolution).

So when you add it all up, is the mini-WASP array as I have configured it a very good idea?  Probably not.  A better approach would be to use 4 cheap large aperture refractors each with a full-frame mono camera and IDAS, H-alpha, OIII, SII filters (one for each scope) – as you are narrowband imaging you aren’t too worried about superb chromatic aberration compensation and the refractors don’t need to be top of the range.  You would then image THE SAME object with all 4 scopes and get all your data for processing down in one go.