La Superba in the constellation Canes Venaticorum is one of the brightest Carbon stars in the sky but it is not a naked-eye object as most of its output is in the infrared part of the spectrum.  It was named “La Superba” by Father Angelo Secchi who was amazed at the beauty of its spectrum, and as you can see in the accompanying (north up) image, it is a strikingly brilliant red star.  La Superba is a very special type of Carbon star, it is in fact the brightest “J-star” in the sky, where a J-star is a very rare group of Carbon stars that has an abundance of Carbon-13 (heavy Carbon).  At between 2,200 and 2,800 K La Superba is one of the coolest true stars known.  In the accompanying image, which was the Astronomy Picture of the Day (APOD) for December 18th 2008, we once again see the obligatory brilliant blue star (SAO 44292) lying at the 1 O’clock position from La Superba.  There are also a number of faint background galaxies in this image, the most obvious lying at the 7 O’clock position which is magnitude 15.7 PGC 43044. 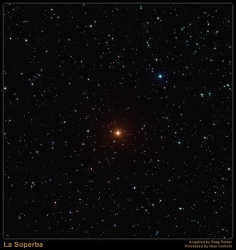