Spica is the brightest very blue star in the night sky, the brightest star in Virgo, and the 15th brightest star in the whole (north and south) sky.  Spica is a close binary with an orbital period of about 4 days.  Spica is a Beta Cephei type variable which has a brightness variability over a 0.1738 day period, in addition, due to the presence of its companion star, Spica is also a rotating ellipsoidal variable leading to an apparent magnitude change of 0.03 over the binary orbital period. Note that this is not an eclipsing binary, but an effect of gravitational distortion due to the close companion star.  As Spica is close to the ecliptic it can be occulted by the Moon and sometimes by the planets as well.  From my 51 degree north location Spica can be seen close to my southern horizon during the spring.  In 2012 as Spica crossed my southern horizon it was accompanied by Saturn which travelled almost directly above it creating a nice photo-opportunity for a wide field setup. 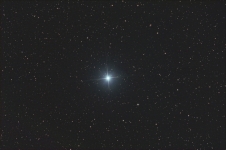