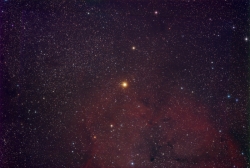 The image of the month for April 2013 is the stunning red star Mu Cephei.  As you know, I really like the impact the bright single star images have, especially when the single star is something very special.

Mu Cephei is also known as Herschel’s Garnet star – it is a red supergiant in Cepheus and is one of the largest and most luminous stars in the whole of our galaxy!

Mu Cephei is approximately 1000 times larger than our Sun’s solar radius, and if it were placed in the Sun’s position, it would reach between the orbit of Jupiter and Saturn.

Mu Cephei’s apparent brightness varies without recognizable pattern between magnitude +3.62 and +5 in a period of 2 to 2.5 years. Mu Cephei is visually nearly 100,000 times brighter than the Sun, with an absolute visible magnitude of Mv = −7.6. Combining its absolute visible brightness, its infrared radiation, and correcting for interstellar extinction gives a luminosity of around 350,000 solar luminosities, making it one of the most luminous stars known.