Well at least it’s there innit!

So what’s the excuse for such a grubby image then? Half the sky (towards the East) was clear at 6:00 p.m. but half the sky running north to south and covering the whole of the West was black and overcast. M82 was in the clear bit 🙂 🙂 🙂  Fired up the Hyperstar, did the 2 star align, autofocused on the second star and slewed to M82 – all going well so far. Took a single 30-second sub to check the framing (that’s the image above) – great – M82 is dead centre. Now just need to get a guide star, get autoguiding, and get a load of subs. Autoguide setup playing up – yep, completely clouded out in those 10-15 minutes 🙁 🙁 🙁  So all I got was this 30-second setting up sub. But at least you can see the damn thing. 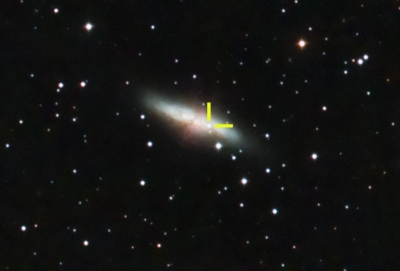 This entry was posted in Hyperstar and SXVF-M25C. Bookmark the permalink.