Clear until 9:00 p.m. last night with a very intrusive Moon.  Saw that Ceres was well-placed in Cancer so put the Sky 90 array on the region.

Ended up with 18 x 15-minute subs.  Can even see Ceres in the SDMask stacked colour image as it is moving so slowly and is so bright (when I first saw it on the subs I thought it was a star as it was actually brighter than all the surrounding stars).  For orientation that is SAO61102 in the centre (guide star).

In the B&W image you can see there is another asteroid below Ceres (that isn’t on the Sky 6).  And it is also worth noting that Ceres is shown in the wrong position on the Sky 6 – call up the live Ephemeris on Ceres to get its actual position if you want to image it. 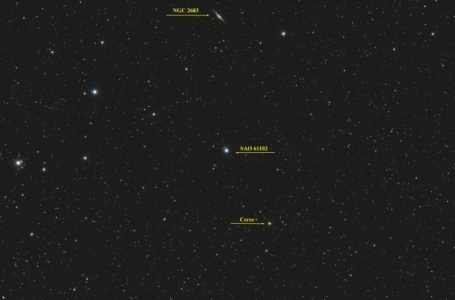 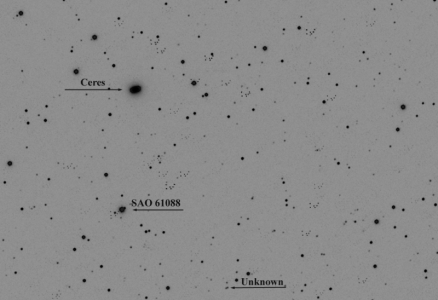 This entry was posted in mini-WASP Array, Sky 90 and SXVF-M26C. Bookmark the permalink.