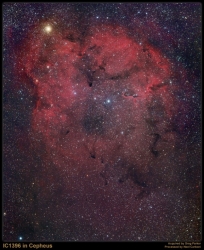 Here is the first in the new series of Images for the Month 🙂  I will not be showing an Imaging Object for the Month but will replace that post with an amateur’s deep-sky image.  The first Image of the Month is this mammoth work from the Parker-Carboni stable and the second greatest amount of imaging time spent on any one object by me so far.  It is of course the massive emission nebula IC1396 in the constellation Cepheus, featuring the famous Elephant’s Trunk nebula and the equally famous Garnet star.

What makes this image such a massive undertaking?  Well for a start this nebula is BIG and it required a 2-frame mosaic even with the massive field of 3.33 x 2.22 degrees from the Sky 90/M25C combo.  Then – in addition to the need for two frames – there was a substantial RGB exposure time for each frame with the one-shot colour camera as IC1396 is a pretty weak emitter.  Finally – the emission was so weak that the RGB image alone was pretty unimpressive and I needed to grab some narrowband data as well.  So both frames also include substantial amounts of H-alpha narrowband data.  Sum total over 20 hours of exposure time on this one and a similar amout of image processing time putting the whole thing together from Noel Carboni.

At the time of finishing this one off I said “never again” – but I have found new strength with the arrival of the mini-WASP array at the New Forest Observatory (which can at least grab the two frames in one go) and of course it has a filter-wheel for each camera with two-inch H-alpha, H-beta, OIII and SII filters fitted.  So I can see a return to IC1396 in 2012 in order to grab a LOT more narrowband data to add to the existing RGB/narrowband template.  Should be fun 🙂