The second reddest star in the sky – 119 Tauri, CE Tauri

This is the second reddest star in the entire night sky after Mu Cephei (the Garnet Star in Cepheus right next to the huge emission nebula IC1396).  CE Tauri is an M-type pulsating red supergiant (semiregular variable) first recognised by A. Ahad as the second reddest star in the sky.  In the accompanying image (north up) we note a nice blue star just to the left of CE Tauri, this is SAO 94649 (120 Tauri), and it is surprising just how many bright red stars seem to have a bright blue close-by companion.  This semiregular variable changes magnitude by approximately 0.3 over a period of around 165 days.  CE Tauri is metal-rich and is likely to be fusing its Helium into Carbon, although Carbon fusion itself cannot be ruled out.  As 119 Tauri is only 4.6 degrees off the ecliptic it affords accurate measurements of its size by lunar occultation measurements.  Look at the Luminosity and Radius of this star – it is a giant in every way. 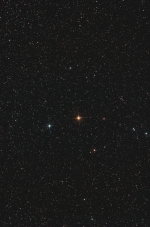